Even a cursory glance at the compositional statistics reveals that the thread had snapped. While the Liederjahr of 1898 had yielded some twenty titles with piano and two works with orchestral accompaniment and Siegmund von Hausegger did complete the Barbarossa some months after his father’s death, that was it; until 1901 he composed nothing expect a few shorter songs with piano accompaniment. Then two of the Drei Hymnen an die Nacht for baritone and orchestra based on poems by Gottfried Keller set in motion a larger vocal production line, whereupon Wieland der Schmied [3] spread its wings in a most symbolically significant manner. On 26 March 1904 the score was finished; inasmuch as it too praised an artistic act of liberation, it picked up directly where the Dionysian self-portrait had left off.

The point of departure for the »steadfast idealist,« as his fellow composer Joseph Marx would later call Hausegger, was not a poetic growth of his own but Richard Wagner’s dramatic fragment of the same name, in which Hausegger, according to his own testimony, recognized potential for the tone poet: »In Wagner the embodiment of the German people, Wieland also has himself grasped as an artist, however, in the highest sense, which, far from relating to any particular individual art, intends to indicate the purely human element situated behind every phenomenon.«

To this purpose and in order to avoid overly naturalistic narrative elements, it was necessary to reduce the full-length action to some fundamental stations. Instead of the flesh-and-blood enemies who conspire to end Schwanhilde’s life, take the highly artistic smith captive, lame his heels, and force him to serve them in a life of drudgery, in the symphonic poem the »title hero« appears as a character who – chained and enslaved by earthly desires – yearns for the ideal image of »woman,« which, however, scatters in all directions when he makes his rough advances. It is first his purifying, painful work that puts him in the position to strive heavenward with his female beloved.

Great powers of imagination are not required to insert the dedication (»To my Beloved Wife!«) and the »program« of Wieland in an interpersonal context – and further help here is provided by the fact that Hausegger during the year of his marriage (1902) also occupied himself with the Lieder der Liebe, love songs after poems by Nikolaus Lenau that flanked Wieland’s compositional development: the basic number of the higher unity is precisely 2, and if in our protagonist the will to create once again had been roused, then it fully awoke evidently only because it first was made complete by the 2. 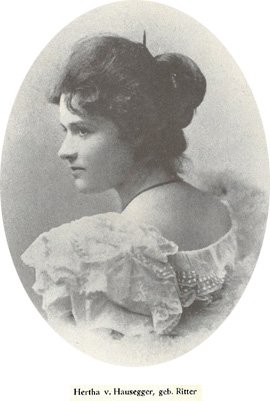 While in the Dionysische Phantasie various abstractions, moods, and states set the motivic pace, the new work needed a thematic personage in order »to let the two characters Wieland and Schwanhilde rise to life before our eyes, just like the poles of an interrelated experience in the world of the soul whose conflict and resolution are supposed to be brought to musical expression.« (6)
This dualism has in fact been selected in order to suggest vivid impressions: already in the third measure Wieland makes his entry with rough steps, while Schwanhilde, like a Moldavian water nymph with a fairy-tale girdle of twelvefold strings, flutes, clarinets, and harps, appears only after a considerable time (2’25) and first shows her countenance in the simple song of the solo violin: too early for the artistic smith oscillating between Erdensehnsucht (Earthly Yearning, 0’35) and Himmelssehnsucht (Heavenly Yearning, 1’08), who incites the tender creature to flight with the »fire of selfish love« (4’40) and immediately gets what he has coming to him. – Quiet, emptiness (5’15) – once again the »earthly wooing« roars – and the second part begins. Der gelähmte Wieland (The Lamed Wieland, 5’53) drags himself along in the shredded note series of his former so very pithy theme, flaring up in the treadmill without any hope, despite the Läuterungsmotiv (Purifying Motive, 7’04), three times in vain attempting to get up while its effects make themselves felt – again the Himmelssehnsucht is followed by a complete collapse into »earthly wooing.« – Schwanhilde (9’45) leads the desperate man to »inner liberation« (10’53), which little by little intensifies into creative resolve: at the beginning of the third part (12’15) Wieland grabs the sledgehammer to forge the wings that finally enable him to fly to the sun with his beloved in the apotheosis of the finale (14’25).

Without noticing it, I have become ensnared in this ideal relational net while functioning as a summarizer of a rather concrete program of many pages. The epithet of The Explainer demanded by Hausegger here, however, could not keep Wieland der Schmied from growing dear to my heart simply because of its music. The compact form and the catchiness of the themes, then the finely chiseled, very nuanced instrumentation, the unaffectedly paced intensification, and the sometimes extremely refined metrical examples of inner tension seem to me to be sufficient to hold my interest for the entire length of the work’s performance – and also to appeal to the guild of postgraduate reminiscence hunters who will not fail to notice Tannhäuser and the Resurrection Symphony or Franz Liszt and Richard Strauss. He or she who so wishes may wonder about the divine poetry of the Scriabin trumpet (14’10) and the »Rose of the Infanta« (15’35) that Franz Schreker first a few years later would have blossom: does it really matter at all when Siegmund von Hausegger in the end creates a picture that Fidus or Ferdinand Hodler could not have more beautifully painted? more