When in 1976 I delivered my oral report on the symphonic poems of Siegmund von Hausegger at the musicological institute at the University of Cologne, I – if I know me – certainly would not have lost too many words on the so-called Badeni Crisis. This Nibelheim, where majorities are defied and demoted, Nessus ready-to-wear shirts are spun out of all sorts of selfish interests, and dubious goals are reached with innocently up-cast eyes or threatening gestures veiled as social justice – these depths to which »the authorities« stoop horrified me so much that I would not have wanted to pinpoint, even in the case of a work that never at all would have been composed without the occurrences briefly sketched above, a site of inspiration in the lower regions on the map of human existence. In addition, as I communicated in the first part of the current study, I had enough on my hands with other matters – to be specific, how I might vividly convey my topic to my seminar audience without audio examples. And then to imagine that in this connection a purely theoretical debate on the relation between art and politics might have been held? Prof. Dr. Heinrich Hüschen, the institute and seminar director, in his inimitable manner probably would have peered over the top of his thick reading glasses and have found nothing of which the »general assembly« should have made a special note! 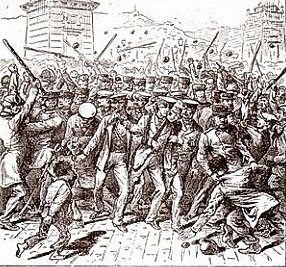 The Badeni Revolt in Prague

However, perhaps a wildly subversive discussion would have erupted, one of those during whose course the question concerning the meaning of the problematic adjective »German« would have led not to an answer but to a lot of opposition. Let us not forget that the genuine members of the class of 1968 were then only eight years old, the same age as the scandal surrounding Hans Werner Henze’s Das Floß der Medusa, which was transmitted »live« on radio during its Hamburg premiere – and in the end was not premiered at all because a red flag on the conductor’s desk had further intensified what even without it was a charged atmosphere of leftist politics.
Like the secondary school pupil who was listening at home to his portable radio (and after ten minutes of the most highly audible audience noise gave up the hope that he would be able to record the brand-new work), (1) seventy-two years earlier Siegmund von Hausegger too had a safe loge seat from which he could follow the tumultuous goings-on: »The demonstrations against the authoritarian measures of Badeni’s ministry assumed a revolutionary character. From the windows of our home I could observe how a crowd of a thousand people scattered with shouts when the cavalry came galloping toward them but then at the next moment again gathered and stormed police headquarters. The alarming reports about bloody battles and the occupation of the parliament by armed forces were read on the street and answered with whistles and screams deafening the ears. It seemed as if it was a matter of life and death for the Germans. The rage of the people flaring up so wildly also had to light a fire in my heart.» This is how in 1905 our protagonist recalled these events in his Kinder- und Jugendjahre in Graz, the memoirs of his childhood and youth. And in the very next sentence he reviews with us the recipe for the fermentations that led to a new creative development: »Geibel’s ballad ‘Friedrich Barbarossa,’ which I originally wanted to set, could no longer satisfy me. I experienced within me the bitter oppression that had once led the poetic folk to create that proud saga of the old heroic emperor Barbarossa, who in the greatest distress will appear as a deliverer. Thus in the end only the plan of great breadth for a three-movement symphony could satisfy my passionately stirred feelings, a work that would represent a glorification of a German kind and a fiery protest against the oppressors.«
Now as Jean Paul recognized, »pure indignation« may make »verses« but »not the best ones,« which is why it was not wrong for our slender and tall firebrand to wait a good year before he began his musical protest letter. During the meantime he was not exactly lazing about. In 1898 he composed a substantial portion of his easily surveyed lied oeuvre; he concluded the series of Graz »Meistersinger Evenings« on which renowned singers like Oscar Noë presented excerpts from the Nuremberg comedy with him at the piano; he spoke on the topic of »Malerei und Musik in ihren Wechselwirkungen mit besonderer Berücksichtigung Böcklins« at the Graz Society of Art History; and above all he occupied himself with the preparations for the Munich premiere of his full-length Zinnober, which was to be staged on 19 June 1898 with Richard Strauss as the conductor. According to everything that the newspapers tell us, he did so with a triumphant result: »Immediately after the performance Hausegger was invited to conduct a symphonic work of his own composition at the Festival Concert of the Kaim Orchestra to be held in September of the same year.« It was not without taking noticeable pride in its native son that the Grazer Tagblatt reported this news on 28 June. Although he could not keep the planned performance date, on 10 February 1899 he made his debut by the Isar with a great and glorious success – when he conducted his Dionysische Phantasie between Beethoven’s Coriolanus Overture and Bruckner’s Seventh Symphony and won praise for all the program points.