His Majesty Goes on His Rounds

The result makes for a rewarding listening experience. On 21 March 1900 the new »symphony« with the movements Die Not des Volkes (The Distress of the People), Der Zauberberg (The Magic Mountain), and Das Erwachen (The Awakening) celebrated its premiere in Munich. The Kaim Orchestra of Munich performed with the composer as the conductor. The resonance was extraordinarily impressive, for Hausegger was, as the Münchner Neueste Nachrichten found, »a musician in whom an extremely rich imaginative life always unfolds on the foundation of strong and genuine feeling. At the same time his composing tends toward grandeur; a mighty, inner singing and a sense thirsting for freedom live and move in him. This lends a dithyrambic character to his themes and melodies, which mostly move over broad lines. In his three-movement work Hausegger has endeavored to combine the narrative element with the dramatic element. His compositional creations want to be both: depictions of conditions and parts of an intensifying development. Essentially he has succeeded in doing so. The main charge that has to be brought against his work is that it brings an overly abundant wealth of formations. Through the activity of the last great masters, music’s tongue, so to speak, has been loosened; in it a lyrical hymnic element has reached a breakthrough that often much too seductively ensnares younger composers. Against this only the clearly descried poetic form can maintain a balance. Where this now in Hausegger was obviously the case, as in the tone painting of ‘The Magic Mountain’ with its orchestrally enrapturing impact, the vividness of the themes was also of special unity. Hausegger offers astonishing things in his never-affected but organically generated orchestral polyphony and in a practically inexhaustible wealth of original instrumentation effects. In sum, he once again has shown that he stands in the first rank of younger composers, and one may expect achievements of enduring significance from him. He was honored with abundant applause from the members of the audience.«

As was its custom, the Grazer Tagblatt let its readers participate in this success and at the end of the year likewise faithfully reported on the victory that Barbarossa and its creator had celebrated in Berlin’s Philharmonic Hall on 3 December: »Hausegger possesses a musico-poetic view of significant power, he knows how to spin expressive and extensive melodies, he knows how to produce atmospheres of the most different kinds; in short, he is a whole artist who has something to say and can do a lot. Sometimes, when his enthusiasm generates noble pathos, he becomes a little too expansive. That is the overfull heart of youth; it should not be scolded for this! With this move and this work Hausegger has placed himself in the foremost rank of those orchestral composers who merit the most attentive interest. Hopefully, we will soon hear more from him.« This is how the press from the city on the Mur cited the Local-Anzeiger from the city on the Spree. 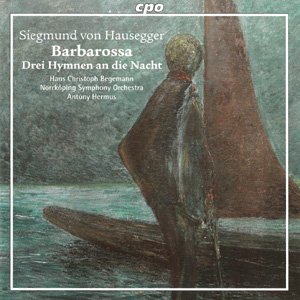 Flanked by a detailed interpretation penned by Oscar Noë, Barbarossa made its rounds with whirlwind speed. Dillinger’s Reisezeitung of 10 November 1901 reported that during the current season the work would »be performed in Berlin, Hamburg, and Leipzig under the conductor Arthur Nikisch, in Frankfurt under the composer, and in Hamburg in the Concerts of the Gesellschaft der Musikfreunde under the conductor Max Fiedler as well as in Wiesbaden, Magdeburg, Cologne, Düsseldorf, Stuttgart, and New York.« Two weeks later we learn (in the Grazer Tagblatt of course) that Hausegger also scored a spectacular coup in the Danube metropolis in the »Concert of New Music« presented by the Wiener Concertverein on 25 January 1902. After Franz Schmidt had presented his First Symphony (a work awarded the Beethoven Prize) and Ferdinand Loewe had premiered Leone Sinigaglia’s Violin Concerto in A major with the soloist Arrigo Serato, Barbarossa stormed ahead to its next triumph. The press reactions were mostly positive. The Reichspost, the Neue Freie Presse, and Das Vaterland were in principle in agreement about the composer and conductor’s significant accomplishment, praised the »dramatic tone painting magnificently elaborated with the usual modern orchestral outlay,« the »boldness of the action,« and the »ideality of the goal,« while the collaborator for the Neues Wiener Tagblatt hid his personal displeasure behind the generalizing »one« and garnished it with considerable cynicism: »Mr. Oscar Noë, the young composer’s commentator, teaches us that the first movement […] presents a picture of the distress and battle in which the German nation found itself during the period of the interregnum. That the second movement […] deals with the tormented soul that flees into the enchanted kingdom and has a blissful dream before the noble image of the deliverer, and that the last movement […] signifies the liberation of the German people from gloomy oppression. With the last chord of the strange tone poem we too were liberated from a din shattering all the nerves that the enthused Mr. Noë calls a ‘Hymn on the German People.’ It was good that ‘Barbarossa’ at the end first exercised its heroic deeds. Otherwise one no longer would have been curious about the other new works.«

Certain types can hardly wait to pop an enthusiast’s balloon, above all, when he makes it so easy for one to do so as Noë does by venturing far beyond the dangerous boundary line where Friedrich von Hausegger had posted his »No Trespassing« prohibition sign a few years before. »Lending tones the significance of linguistic signs,« which from the very beginning would mean restricting the receptive capability of the audience, or, in other words, pre scribing for the listeners what they have to feel and where, how, and why they have to feel it – this lowers their aesthetic antennae down into the thought box, robs them of the effectiveness proper to their nature, and in this way limits the experiential possibilities in very much the same way that the dreadfully boring but ineradicable discipline of the interpretation of poetry is fatal to every genuine poetic encounter.