»Being German« for a long time had no longer meant »doing a thing for its own sake.« It meant, as Otto Ernst had the Hamburg senator Dr. Hachmeister say in his Hermannsland in 1921, »mistrusting the straight line and seeking the wrong way; it is German to suspect what is simple and to regard with wonder what is complicated and intricate. The German wants to see the reverse side of every thing; that is nice of him; but then he becomes so completely smitten with the reverse side that he regards it as the only one that is right, even if it is the reverse side of a painting by Rembrandt. It is good and right also to seek the side paths in the woods; but the German in his conscience is not satisfied until he has gotten stuck up to his neck In every bog.«
By that time Siegmund von Hausegger long ago had given up the large formats. Ten years had passed since the hopeful personal declaration of the Natursymphonie and four years since the nostalgically gladdening Aufklänge on »Schlaf, Kindchen, schlaf.« Three Songs after Old German Poems had just been completed: here the young man for whom the sky was once the limit dreams himself back into the glorified realm of the old emperors with the delights of travel, the delights of bees, and a little dance song. Between 1923 and 1927, in the Three Songs after Middle High German Poems for a Female Voice, Viola, and Piano, he would work against complete muteness in the guise of a Minnesänger. The Morgensegen for choir, tenor, orchestra, and organ with which in 1925 he once again would rouse himself to compose a work for a larger ensemble also set a medieval text to music: dreams of a past time filled with light that never existed in just this way but all the same are more real than the present in which one has to find a reason for everything, analyze it to pieces, and justify it before the critics; in which true enthusiasm no longer exists because one has made considerable progress along the path leading to the elimination of the gods; and in which the man who nevertheless dares to hoist the storm-shredded little banner of old ideals exposes himself to ridicule. 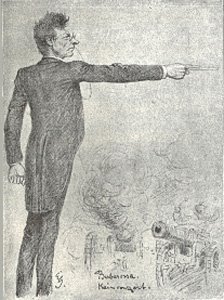 As Heinrich Kaminski’s pupil Heinz Schubert wrote in Die Musik in 1930, Hausegger had once been described as the »conductor with the square soul without the intention of doing any sort of injustice to him; rather, this image was supposed to express the strong emphasis on consciousness in his creative work. The deepest explorations of the soul in Hausegger are always deliberately guided by a higher, ordering principle; it is kept on paths that gives it a succinct and sharp, almost »square« formation, without slavishly inhibiting it.« This corresponds, as far as the man at the conductor’s desk is concerned, very much to descriptions by contemporaries, and also applies to the composer insofar as every inspiration still needed intellectual rethinking in order to take shape in an enduring work of art. In the end it cannot be denied that in Barbarossa and more yet in the much more compact Wieland there are some passages in which the extramusical intentions cover over the tonal events. But these are short and cannot hide the fact that we are dealing with a being who was uncommonly capable of perception, sensitive, and easily wounded and who through self-discipline not only avoided creative meanderings but also at the same time attempted to protect himself from blows by the critics.

This may possibly also be the reason why Siegmund von Hausegger in practically all of his creations had a need of the (disciplining) word – whether it involved a libretto, a programmatic guideline, or the text for lieder and songs. At the time a lot of flattering things were said about his symphonic choral works ranging from Schmied Schmerz and Neuweinlied (1897–98) after Otto Julius Bierbaum to Sonnenaufgang after Gottfried Keller and the Weihe der Nacht (1908) after Friedrich Hebbel, and for some observers the Three Hymns to the Night for baritone and orchestra numbered among the best that the composer had written through to the thirtieth year of his life. Understandably, for precisely in these three songs after poems by Gottfried Keller the virtues and individual qualities of their creator join together to form an overall picture in which the vertical layers and horizontal sequences produce a harmonious whole: a tone poem in three movements from the rather dreamy introductory »Stille der Nacht« through the dramatic ferment of the complex scene forming »Unruhe der Nacht« to the solemn and conciliatory finale in »Unter Sternen.«

The means employed to this end are typical of Hausegger. Original melodic inflections (that one sometimes would expect more from Ferruccio Busoni), very special modulations and interrelations of musical keys, and the skilled, highly atmospheric orchestral coloration are emanations of a character capable of the greatest enthusiasm; the musical vault of the firmament from the B major at the beginning of »Stille« to the B major at the end of the first stanza (»die spielend sich im Weltraum wiegt«) is one single continuum of devotional astonishment; the fff detonations at the »resounding show« of the thunderstorm in the middle of the restless night might cure even the raging King Lear of his madness; and when at the end of the cycle the hymnic brass instruments go over into the starry night after »jubilant prayers,« the stage goal of a »cosmic journey« has been reached. After this the Natursymphonie absolutely had to come.

Siegmund von Hausegger set the first two Gottfried Keller poems in 1901. During the next year Felix von Weingartner, his boss at the Kaim Orchestra, set precisely the same two texts. His two-part Opus 35 was published by Breitkopf & Härtel already in 1904. Hausegger’s third Hymn dates from 1902. The complete work was published by C. F. Kahnt’s successor in 1905. Might the Lord of Münzberg (Weingartner) in the end once again have wanted to get the job done more quickly and efficiently? He would have been capable of devising such a scheme: after all, the name of his »second-in-command« is not mentioned a single time in his Memoirs</em