A Listener’s Guide to an Important Work

In 1905 Siegmund von Hausegger himself sketched the programmatic content of Barbarossa in a considerably more compact form, which will be reproduced in what follows – with some indications of temporal markers in the first movement: 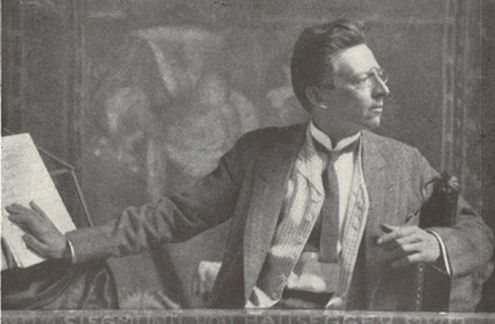 »I. The Distress of the People. – Introduction: the German people. – Fast movement: primary theme with a first part ([1] 5’14) expressing oppression by the enemy and with a second part (5’37) defiance conscious of its strength. – Tender secondary thematic complex: yearning for liberation and peace (6’49). – Development section (9’08): despondent struggle for freedom; at the high point, after great intensification, pp with the Barbarossa theme (11’05). – Recapitulation (12’07): renewed stormy onslaught of the enemy; secondary theme with the expression of wildest despair (13’10); collapse.

»II. The Magic Mountain – Introduction: in scherzo character: haunting foggy scenario around the slopes of the Untersberg – fantastic action led into the inner space of the mountain. – Slow movement: main part: a wondrous picture of old German glory is shown to the wanderer; Barbarossa and his loyal followers sunk in deep sleep. – Secondary thematic complex: he is transported back to the fairy-tale world of his childhood days; at this sight it begins to dawn on him who alone is able to help the people. But the yearning shout for liberation fades away without the sleeping emperor having heard it – the ravens continue to fly around the mountain. – Repetition of the scherzo; fog again rises and gradually envelops the scene.

»III. The Awakening. – Introduction: return to somber reality; a shout of the most wrathful rage. The recognition of the German character as the sight of the heroic emperor revealed it now makes the people worthy of liberation. From the depths of the mountain mysterious trumpet tones sound and assume increasing might. The rocks burst with a thunderous noise. Barbarossa has awoken and goes into battle with his men. – Fast movement: the battle; march theme, characterizing the din of battle; final victory as the theme of the German people. – Middle movement: Barbarossa moves over the lands as the prince of peace. – Recapitulation: the march theme, as an expression of joy at victory. – Conclusion: repetition of the whole first part of the introduction of the first movement.«

When we accompany Siegmund von Hausegger’s Barbarossa with the three skillfully linked tableaux, we will notice that the many pictorial and musical associations become even more pleasurable the more we remove – all right, I’ll say it – the »folk ornaments« from the outline of its action. Then we can let our gaze move far and wide beyond the score and discover many good friends who have cozily gathered together to greet us from the path side. Out of the primeval fog it is not only Anton Bruckner’s Romantic Symphony that peers out but also the beginning of the Karelia Suite; the great line from the first fortissimo (1’23) is traced with Zarathustra’s pair of compasses; in between Franz Liszt’s Ideale and Mazeppa involve themselves in the process; the spooky ravens – in Hausegger they circle not only the Thuringian Kyffhäuser but also the Salzburgian Untersberg – might have fluttered by from the Walpurgisnacht in Raff’s Spring Symphony if they did not hatch out of a nest located under Nikolai Rimsky-Korsakov’s full beard; and the music to which the deliverer rides out in the finale like the young Roger Moore once did in the role of Ivanhoe takes us from the knightly days of yore into the immediate present: on the one side countless battalions march over opera and concert stages to very similar sounds (here I need only recall Raff’s Lenore); on the other side the well-founded suspicion arises in me that during the course of the musical skirmishes a few particles of Barbarossa came undone and ended up in Gustav Mahler’s Sixth Symphony – or, more precisely, in this colossal work’s finale, where the march proceeds in the very same way as in Der Not des Volkes (4’35 and 12’07) and in Das Erwachen, which in addition with its garish flute trill chains and grotesque inserts might have supplied the master collector of motivic index cards with some material, (3) while vice versa in Hausegger some earlier »Mahleriana« very much can be detected – for example, the nostalgic pendulum figure in the introduction of the first movement ([1] 3’00) out of which the »distressful« thirds of the two bassoons emerge after twelve measures (3’34), or the fine woodwind tone of the clarinets and oboes in the finale ([3] 9’50).

We see that the gradual reduction of meanings even in a work of art that aims at being just as so very »significant« as Hausegger’s Barbarossa does would enable the compositional substance – for this doubtless is present – to achieve its effect with greater and greater freedom if there did not exist in this universe the general compulsion increasingly to overload the simple and naive so much that it ends up collapsing under permanent complexities. Some years after the acclaimed premiere and after manifold performances at home and abroad the dismissive voices of the critics increased in numbers. In the Signale für die musikalische Welt Siegmund Pisling complained, when Richard Strauss conducted his fellow composer and conductor’s work in Berlin, that nobody would expect »from unaligned, halfway modernly oriented professional judges, which means from men who even in Wagner’s immortal genius no longer view the proclaimer of the modern soul with its ineffable intricacy and multivalency, […] that in the year 1916 of the Christian era they might generate understanding warmth for music that sails along in the wake of the Wagnerian Armada.«

During the following year somebody grumbled in the same journal after a Kiel performance that in Hausegger »things ferment and rage – seventeen years ago at least, when he still was looking for new possibilities of musical expression. The work was praised very much at the time, today it is practically forgotten, and Hausegger himself would probably no longer believe that he then was on the right path. – The world, weary of storm and stress, again wants a sugar cake, and accepts cracks of the whip only from a very great man.«