… you should make a special note of that!
(Prof. Dr. Heinrich Hüschen)

On 5 April 1897 the Imperial and Royal Minister-President Kasimir Felix Badeni (1846–1909), acting in his capacity as Minister of Domestic Affairs and joined by the Ministers of Finance, Justice, Trade, and Agriculture, issued a decree »concerning the linguistic qualification of the civil servants employed at the government offices in Bohemia.« Two and a half weeks later, on 22 April, a corresponding decree was issued for Moravia. A storm of protest of the kind that this Polish count of Italian descent hardly could have foreseen immediately ensued. The fact that all civil servants in the two territories were supposed to have a command of German and Czech was one of those self-serving drawing-board notions with which politicians of earlier centuries – I emphatically deny expressis verbis that I might be suggesting comparisons of any kind involving living persons and recent events! – on repeated occasions attempted to obtain a couple of bonus points from their negotiating and contracting partners. Regardless of the fact that a good third of the districts (77:216) in the Bohemian and Moravian territories were solely German, Badeni’s intention in his general decree was to offer a piece of »sugar candy« to the Slavic majority, so that its members would desist from their claims to the domestic independence of their regions and cease to insist on a political construct like the one that had been granted to the Magyars thirty years before for their loyalty in the Austro-Prussian War (which ended in a miserable defeat) when the Budapest coronation of Franz Joseph I had marked the establishment of the Dual Monarchy of Austria-Hungary. 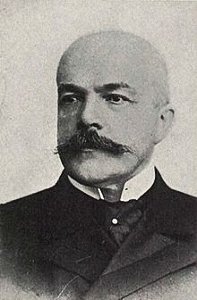 Badeni’s offer met with vehement resistance in the German regions of Austria. First and foremost, of course, in the districts directly impacted by it, where it naturally had to be expected that the Czechs, who usually were bilingual (»At your service, yes sir!«) would supplant German civil servants, most of them monolingual, and thus gradually gain control of matters that until then had been »none of their business.« It was thus not surprising that Prague and Vienna became two main arenas for the staging of mass demonstrations, but in Graz too the Germans, who once again were being asked to foot the bill, went out on the streets. The disturbances did not last for long. On 28 November Badeni, who had threatened to resign before the decree had been signed (this too a maneuver that has long been a thing of the past!), saw himself forced to submit his resignation a second time, and two days later His Majesty was happy to grant him this request. On 14 October 1899, on the Polish count’s fifty-third birthday, the current Minister-President Clary-Aldringen revoked the decree that had been so violently opposed.